St. Martha Church grounds became a circus lot for several days each year in the second part of the Thirties. 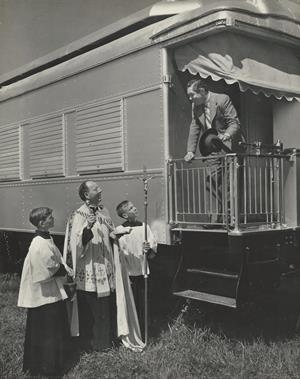 Thousands crowded the gardens around the little church to see Ringling Bros. and Barnum and Bailey circus put on 14 performances of the Greatest Show on Earth at the Third Street and Adelia Avenue properties. The first was in 1935; the last in 1941 – just after the present church was erected.

The big show would take time out of its annual preparations for each impending season to stage two two-hour performances for the benefit of St. Martha Catholic Church. It was a substantial gesture of good will marking the high esteem in which Father Elslander was held by the management of the circus and its effectiveness was accentuated by the annual attendance of more than 2,000 persons, of whom fully two-thirds were non-Catholics.

On person in the audience in the 1936 performance was a Saverna Park, MD winter visitor, Edward  J. Cox, one of the founders of The Associated Press, the famed news-gathering agency. Though “on vacation,” he took the time to record his reactions in 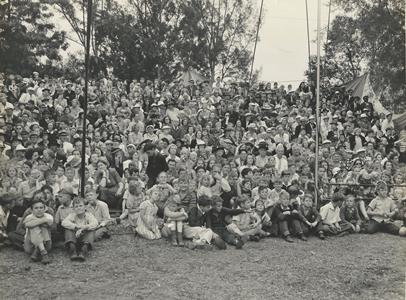 “To say that Father Elslander was grateful is to put it mildly,” he wrote. “The results far exceeded his most sanguine expectations. The church received every penny of the proceeds without one cent expense.” “At the Masses on Sunday, Father feelingly expressed his appreciation of the great generosity of the circus management and for the perfect cooperation of the performers and other personnel at the exhibition.” “He said a public Mass on the day the circus left winter quarters to open its 1936 season in Madison Square Garden, New York City.”

Cox wrote that he had not found it hard to discover the reason for “this spontaneous manifestation of good feeling for a modest cleric. Father Elsander is not only a ‘priestly priest’ but a ‘Number One Citizen’ always ready to cooperate in any movement for the public interest; he is intensely human.” Among the events that led Cox to this conclusion was the action of a local lodge of the Junior Order of American Mechanics postponing a meeting scheduled the same evening as the circus to permit its members to attend the show.

Why would a Baltimore audience be interested in Father Elslander’s circus connection?

Father Elslander, Cox reminded them, was the first student adopted by the Baltimore archbishop, the Most Reverend Michael J. Curley. When the Sarasota priest was studying for his vocation, Archbishop Curley had just been appointed head of the St. Augustine diocese. His successor, the Rt. Rev. Patrick Barry, was to ordain St. Martha’s pastor and later appoint him to lead the parish. 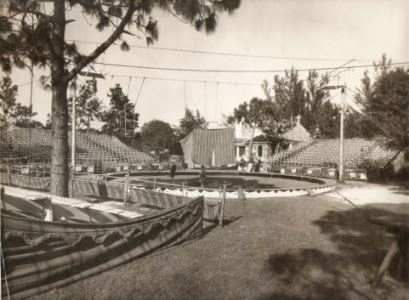 The circus itself was staged under the direction of Pat Valdo, circus personnel director, with Superintendent Carl T. Hathaway, and Boss Canvasman James Whalen standing by to implement Valdo’s needs. The show’s vice president, Samuel W. Gumpertz, is believed to have originated the idea of a benefit circus performance for St. Martha’s.

and Schmitt ran a “keeno” concession and Plunkett, Reiblin and Sullivan were the “spielers.” The names of many others involved have unfortunately been lost.

Because many fans saved show programs and pasted news accounts into family scrapbooks, it wa

s easy to get a fairly complete roster of many of the beloved “greats” in Ringling circus lore who contributed to the excitement and success of these annual circus shows. 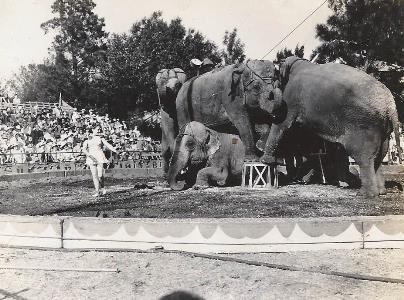 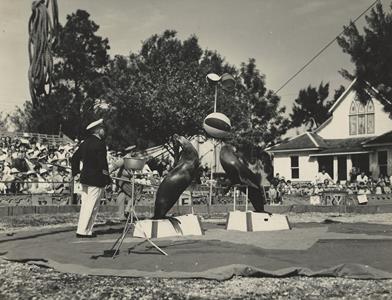 Clyde Ingalls was ringmaster and Merle Evans often did the bandmaster stint though the bands might have been Sarasota units. Charles LeMaire, noted theatrical designer, produced the colorful costumes. 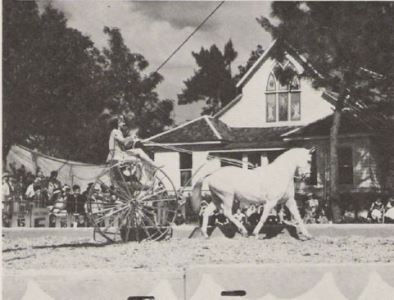 So under the experienced direction of Messrs. Valdo, Hathaway, Whalen et al, these skilled performers and a full complement of such authoritative accessories as elephants, horses and the like, put on a fine show in a picturesque and unique setting. The canvas wall of the “big top” enclosed the single ring – at night stars formed the canopy and in the day time, white clouds and blue skies. The familiar white Ringling circus ticket wagon stood in front of the main entrance. Sometimes, a full half hour before the show started, the SRO sign would go up. 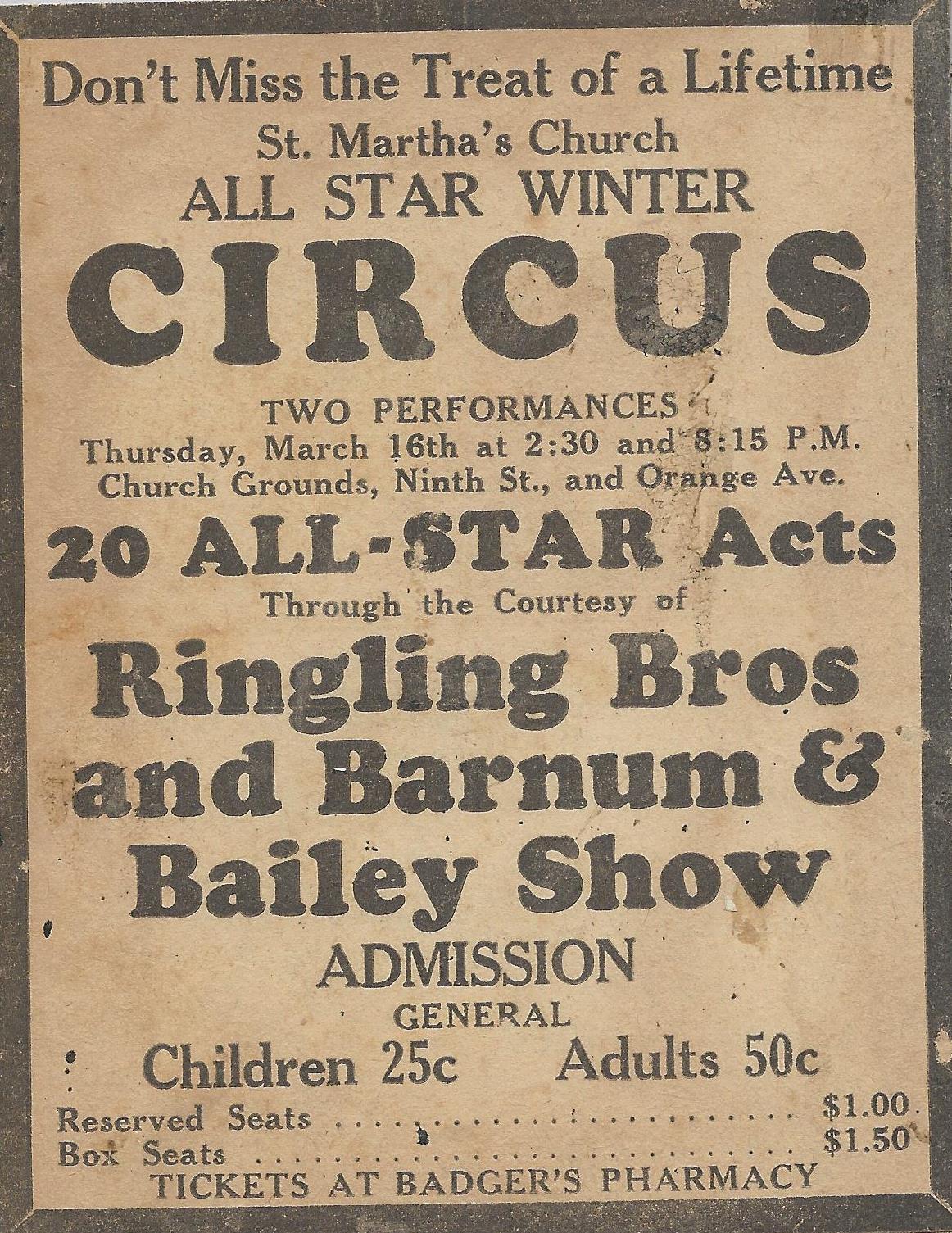 It would be a real mob scene today especially at such prices. Children entered for a quarter and parents could get in for 50 cents a piece. If anyone needed reserved seats, the tab was a single dollar bill. There were box seats for $1.50.

Meanwhile, show receipts helped build up the fund reserve for a new church building at Orange Avenue and Third Street. It would be built and occupied before World War II involved the United States.

Click on the Circus and Traveling Show Ministry for information concerning this ministry from the United States Conference of Catholic Bishop.