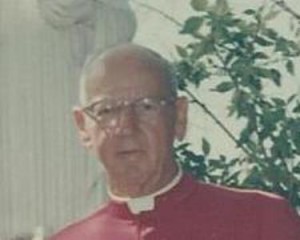 Born in 1892 in Atkinson, Illinois, was the fifth of six children of Leopold Elslander, a farmer, cotton broker and Belgian immigrant, and Philomina de Fryne, a native of Holland. When he was four years of age, the family moved to Cleveland, Mississippi, and eight years later, to San Antonio, Florida, a comparatively new settlement in the west-central highlands of the state. As a training center for a future parish priest, Charles’ parents could not have chosen a better spot. Living conditions were at the pioneer stage but there were Catholic schools and an established church, the only remaining evidence of early Spanish Catholic influence.

Four years after graduating from St. Leo’s High School in neighboring St. Leo, Charles Elslander entered Mount St. Mary’s College in Emmitsburg, Maryland in 1914. He completed his studies for the priesthood at St. Joseph’s Seminary, Dunwoodie, New York and was ordained for the Diocese of St. Augustine. He served in several parishes before being assigned to St. Martha.

Father Elslander’s service to the parish was rewarded by the Church by his elevation to the rank of Domestic Prelate with the title of Right Reverend Monsignor. His service to the community was recognized when he was chosen Sarasota’s “Man of the Year” by the American Legion. Monsignor Elslander announced his plans to conclude forty years of service at St. Martha in December 1967 – having reached 75, mandatory age for retirement of priests in the Diocese. He retired in January of 1968. Monsignor lived in Sarasota in retirement and celebrated with the Parish his fifty years as a priest on June 11, 1972. He died at Maria Manor, a nursing home in St. Petersburg, Florida on March 16, 1977, and was buried from St. Martha. 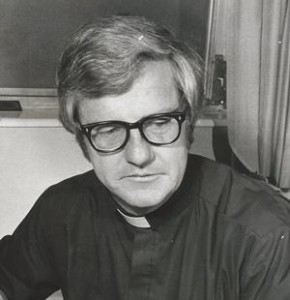 Born in Geneva, New York on November 24, 1927, attended Catholic schools there. He then studied for the priesthood at St. Andrew’s Minor Seminary and St. Bernad’s Major Seminary both in Rochester, New York, and at St. John’s Major Seminary in Brighton, Massachusets, and was ordained by Archbishop Joseph P. Hurley on February 2, 1955 for the Diocese of St. Augustine. He served a number of parishes, was president of Bishop Moore High School in Orlando and on the Board of Catholic Schools and on the Priests Council for the Diocese before coming to Sarasota. In October he was named as Coordinator of Religious Education for the Diocese of St. Petersburg, as well. 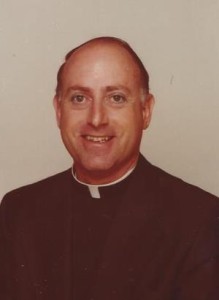 A native of Waterbury, Connecticut, born November 3, 1938, his family moved to St. Petersburg when he was ten. He graduated from St. Paul’s High School there. His priestly studies took him to St. Bernard’s Seminary in Rochester, New York, where he received a Bachelor of Arts degree and to the Gregorian University in Rome where he earned his Licentiate in Sacred Theology. After his ordination at the Jesuit Church of St. Ignatius in Rome on December 18, 1963, he was assigned to the Catholic Student Center at the University of Florida in Gainesville. His first post as a parish priest was at St. Martha in 1965 and he was Monsignor Elslander’s associate until the latter priest’s retirement. He was the director of Monsignor Elslander’s retirement ceremonies. From 1968 until he returned to St. Martha, Father assisted at the Cathedral in St. Petersburg and was vice chancellor of the diocese. Subsequently he was named pastor of Corpus Christi Church in Temple Terrace, Tampa. In the Diocese of St. Petersburg, he served also on the liturgical commission as chairman, on the diocesan personnel and realty boards and in 1976 was appointed dean of the Southwest Deanery. Fr. Carosella served as the first Chancellor for the Diocese of Venice under Bishop Nevins for 17 years, and is presently the pastor of Our Lady of Mercy in Boca Grande.

Father Rourke was born in Fitchburg, MA on June 18, 1936 and was ordained in Worcester, MA on May 23, 1963. Father spent the first ten years of his priesthood in Ft. Portal, Uganda, East Africa. He then returned to the United States and was an Associate at Nativity Parish in Brandon, FL and then St. Joseph’s in Bradenton for seven years. He was Administrator of St. Mary’s in Tampa before becoming pastor of St. Francis of Assisi in Grove City in 1983. Father came to St. Martha from Grove City. On July 12, 1986 at the 4:00 p.m. Mass, Father Rourke was installed as Pastor of St. Martha by the Very Reverend Edward Moretti, Episcopal Vicar for the Northern and Eastern Deaneries of the Diocese of Venice. 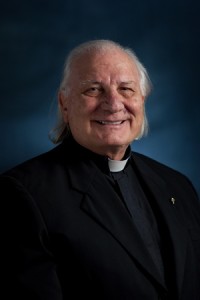 Father Stampiglia was born and raised in Rome, Italy. He was ordained a Pallottine priest in Rome on November 27, 1960 just two years before the opening of Vatican Council II. Father Fausto has the distinction of being the first pastor of St. Martha Church who belongs to a religious order, The Society of the Catholic Apostolate, known as the Pallottines.

Father Fausto served as associate or pastor at parishes in New York City and Florida. While serving in Florida he founded four parishes and holds the distinction of being the only priest in the United States who started the Permanent Diaconate Program in three dioceses: Pensacola, St. Petersburg and Venice.

In 2010, Fr. Fausto was awarded the “Papal Medal of Pro Ecclesia et Pontiface” (for Church and Pope) by Pope Benedict XVI, the highest recognition for a priest, for his exemplary service to the church. In November 2010, Fr. Fausto celebrated his 50th anniversary as a priest by offering mass in Rome, where he was ordained, along with three of his fellow classmates. 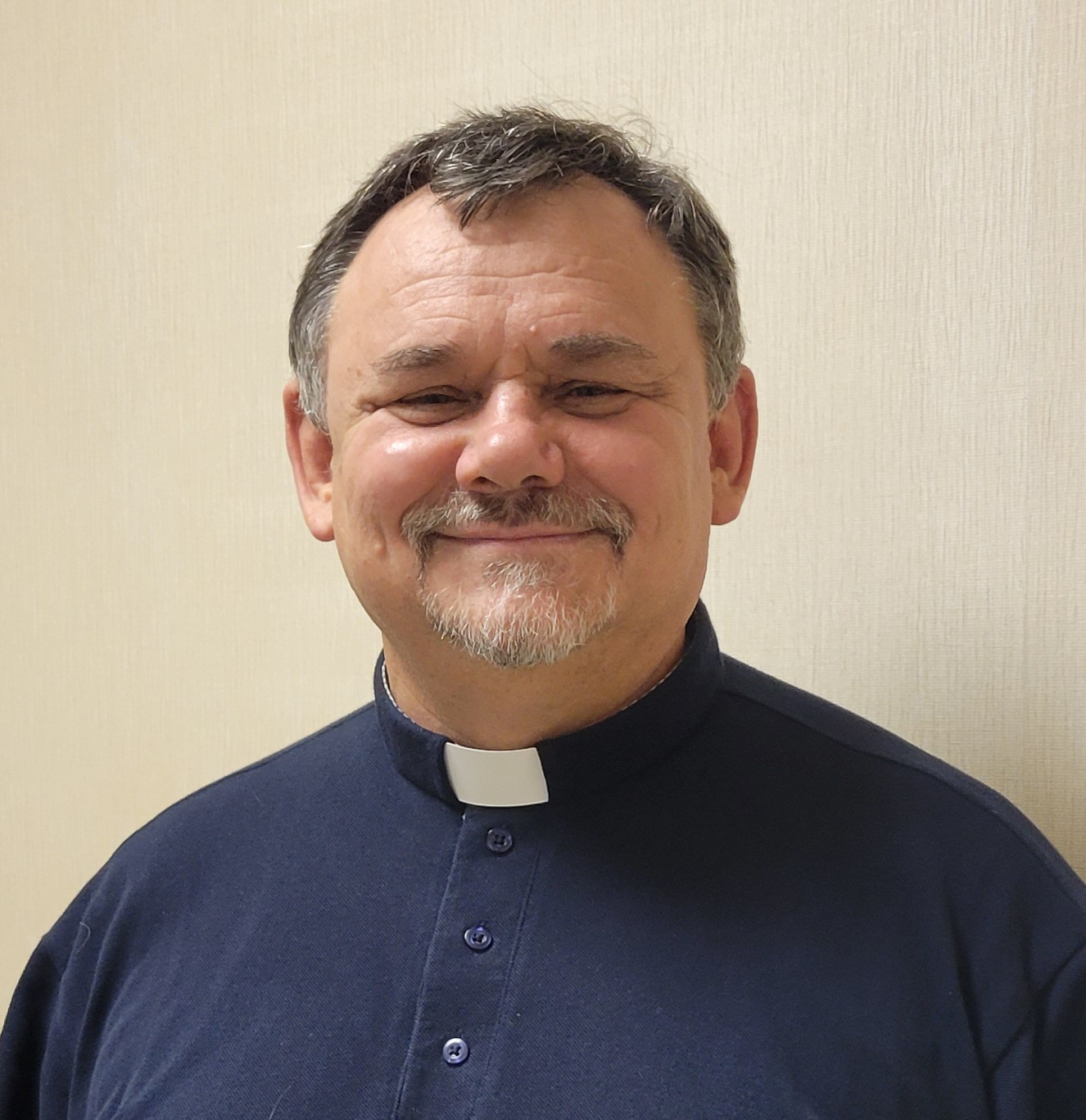 Fr. George Suszko was ordained in Poland in 1989 where he served in the Pallottine parish in Warsaw. After, he worked in the missions in Papua New Guinea for 5 years and before coming to Sarasota, he worked for 24 years in the Archdiocese of St. Andrews and Edinburgh in Scotland, U.K. Fr. George is a member of the Society of the Catholic Apostolate (Pallottine Fathers), established by St. Vincent Pallotti in 1830 in Rome to revive faith and rekindle love among the lay members of the Church and to respond to various apostolic needs of the time.

Fr. George was appointed as Pastor of St. Martha Parish on May 14, 2022 by Bishop Frank J. Dewane.